The above-named is well known as a
staunch anti-fascist. As a result of his
artistic achievements in photomontage,
as well as to culture and politics, he has
made a name for himself well beyond the
borders of Germany. He has greatly
developed the art of photomontage.
Due to persecution by the Nazis,
he was forced to leave Germany and
emigrated first to Czechoslovakia and
later to England, where he still lives.
He has continued his work in exile.
Since the end of the war, exhibitions
of his photomontages have been
staged in America, France, Switzerland,
Czechoslovakia, and in the Soviet Union.
His work has been generally well received
by the press, especially by the French Poet
Louis Aragon. Heartfield is still sprightly
and artistically active. He wishes to
return to Germany. We can support this
wish most sincerely.”

1947 Letter From
The Socialist Unity Party of Germany,
Personnel Policy, Müller
to

At the Potsdam Conference (17 July to 2 August 1945), after Germany’s unconditional surrender on 8 May 1945, the Allies divided “Occupation Zone Germany” into four military occupation zones. There is now an “East Berlin” and “West Berlin.” East Germany (GDR) will evolved into one of the most repressive communist state in Europe. The Stasi (East German Secret Police) are the government’s enforcers. They reign institutional terror to the residents of East Berlin.

John Heartfield is forced to leave the England. All his pleas to remain in London for his “health and work” have been refused. His financial situation is so bad this great artist applies for a position in the welding trade. His wife, Gertrud, had been a house servant. Heartfield receives some money from his son, Tom George Heartfield, but he’s barely getting along.

In 1947, John Heartfield is offered an appointment as professor of satirical graphics in the department of applied arts of Humboldt University, East Berlin. His brother, Wieland Herzfelde, wants him to return to East Berlin. Wieland has a good position and is doing well in East Berlin. But he is not the same man without his brother. He plans to have John take the apartment next to him at 129A Friedrichstrasse.

Heartfield clearly does not want to return to East Germany. He cites an injury to his spine, caused by an accident, as a reason to remain in England.

In public, he asks the question, “Do I have to become a professor?” 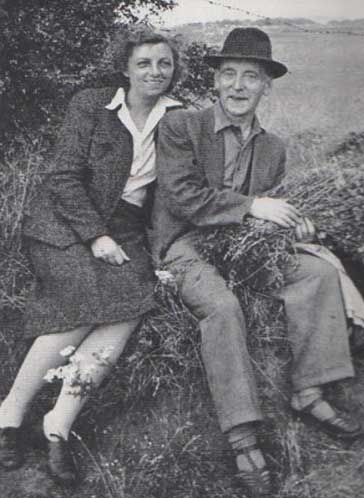 John found a measure of security and happiness in England. He met the woman who became his thrid wife, Gertrud Fietz. He pleaded to remain in England for his health and his work but he was deported.