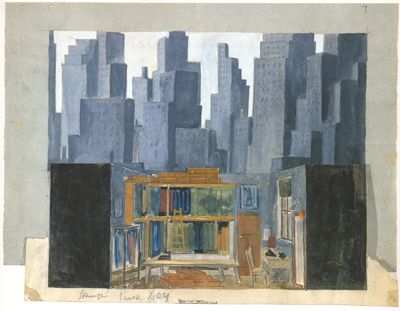 
Sections Of Heartfield Designs For The German Theatre

Heartfield Stage Design for German Theatre is an expanding collection of Heartfield’s set designs for the German Theater.

Heartfield Stage Projections is a growing collection of Heartfield’s stage projections and costume designs for Bertolt Brecht and German Theater.

NOTE: New sections and media are constantly added to the Exhibition

Heartfield’s innovative stage sets, stage projections, and costumes for playwrights such as Bertolt Brecht, Erwin Piscator, and David Berg were more than simply a vital part of German Theatre history. His work continues to influence theatre productions around the globe. The Dada artist’s collaboration with Bertolt Brecht resulted in a new form of theatre that became a worldwide sensation.

John Heartfield and Bertolt Brecht met in the early nineteen twenties and became lifelong friends. Heartfield worked for Brecht as a stage and costume designer. It’s very possible this incident caused Brecht to rethink his ideas of how his plays should be presented. Perhaps audience should be reminded that the part was an actually part of their own reality.

Brecht’s involvement of the audience in the “reality” of the play became known as “the alienation effect.” Years later, this exhibition’s curator felt Heartfield’s influence upon Brecht when he attended works presented in New York by The Living Theater and Joe Papp productions of Shakespeare.

After pleading in a letter to authorities to be able stay in England for “his work and his health,” John Heartfield was forced to leave. Financially and culturally, he had few options. His son, Tom, tried to bring him to the United States, but that proved impossible. His brother, Wieland, arranged for him to settle in East Germany (GDR). It was a tragic mistakes. Because of his long stay in England and the fact his dentist was under suspicion, the Stasi interrogated Heartfield and he was nearly tried for treason against the GDR. A huge amount of his surviving artwork disappeared behind the iron curtain and remains locked away in an archive to this day. In East Germany, the outspoken artist lacked an outlet for his political montages, as well as a target as clear as the Nazi Party. His work creating individual pieces of mixed media art was, in effect, brought to a close. It was replaced with a renewed and reshaped passion for his work for the theater. He contributed to productions of the Deutsche Theater and the Kammerspiele. He also worked with the Berliner Ensemble.

Explore this section of the Exhibition and discover the Heartfield’s costume designs, stage backdrops, projections, scenery, machinery, and props.

“Heartfield’s sense and understanding of the theatre never let him forget that human beings are the focus of everything that happens on the state. That is why it is useless to look for the sensational, the forced original in his décor. To him, the message was always more important than the effect. Content and substance of the play always remained essential for him. To translate it into the idiom of stage design, to make it visible and perceptible, was his priority. To this end he employed all the possibilities and effects of the theatre and exploited stage technology to its full capacity. […]

Heartfield stage designs were austere where abundance was not missed, and lavish where austerity would have detracted. He stylized where realism gave priority to the character of the play over artistic invention. His décor always testified to both his acute power of observation and though the breadth of this imagination, which never induced him to become lost in the frivolous, the picturesque, the merely illustrative. The sense of the whole remained dominant, with neglecting the characteristic detail in the process. Irrespective of the extent to which he used backdrops, scenery, machinery, and props, in his stage settings Heartfield made the environment visible without distracting attention from the action on stage. In uniting space and actors, groups, and plane, he made the stage design a part of the action. As a stage designer, Heartfield was and remained a partner of the author, the director, and the actors.”