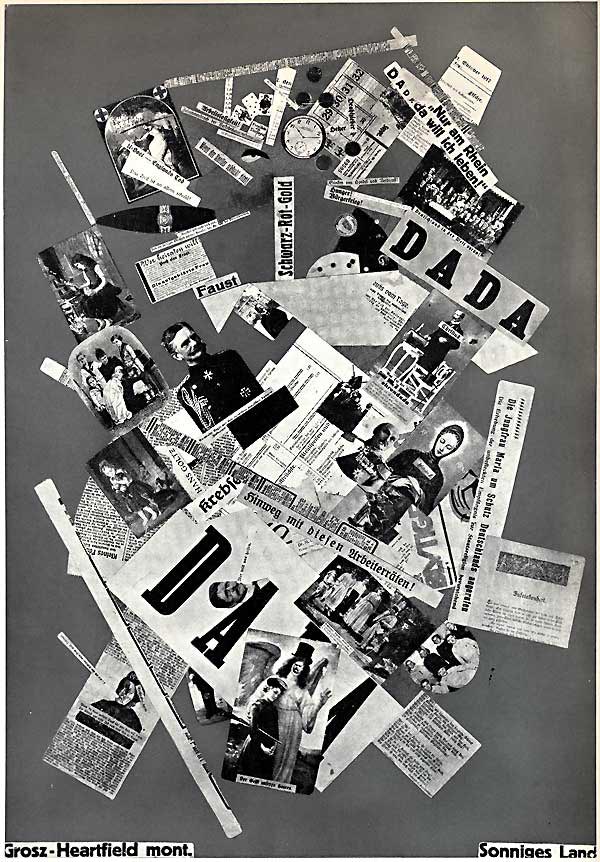 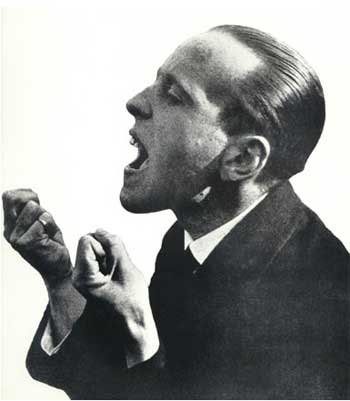 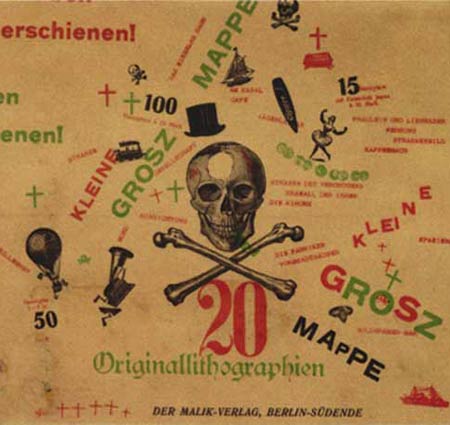 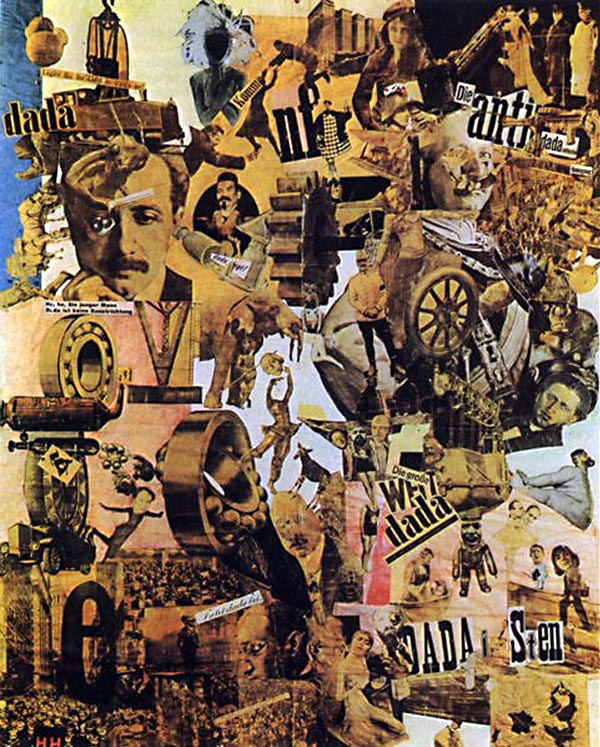 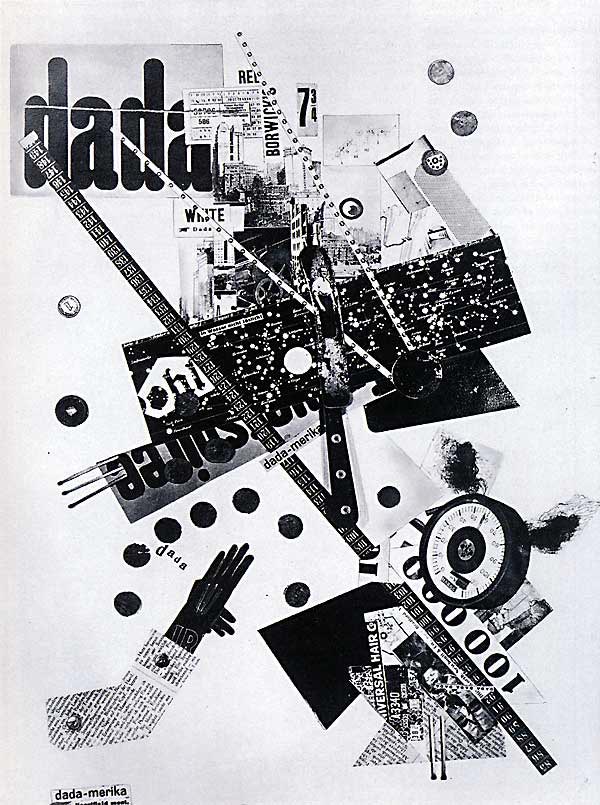 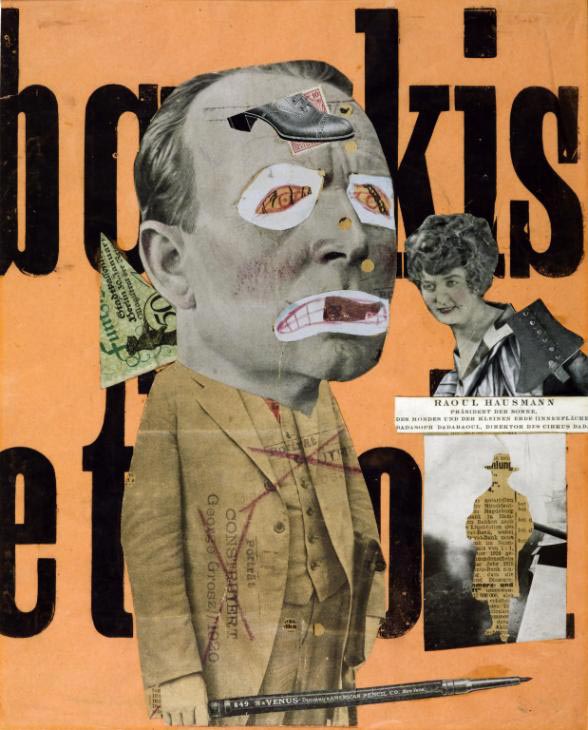 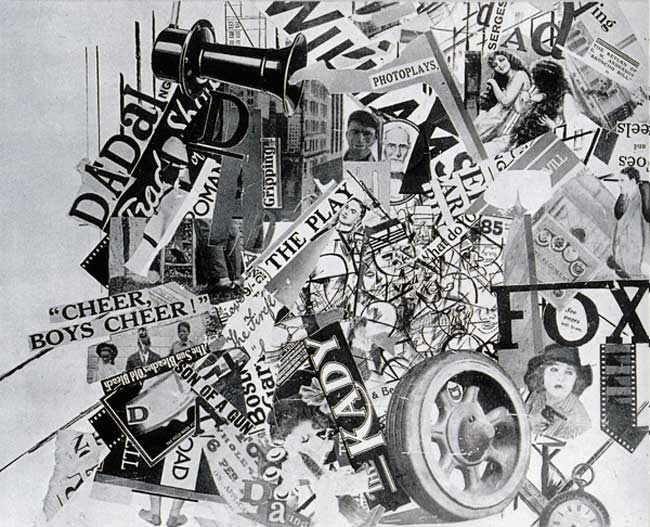 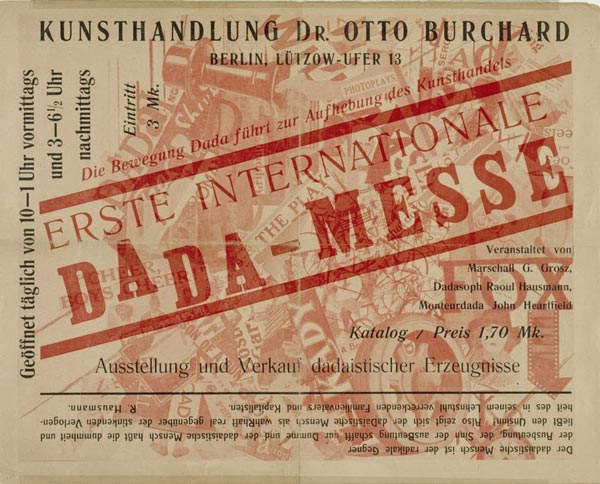 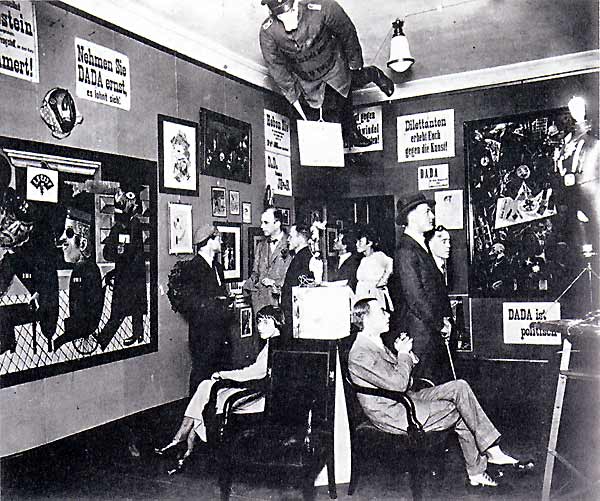 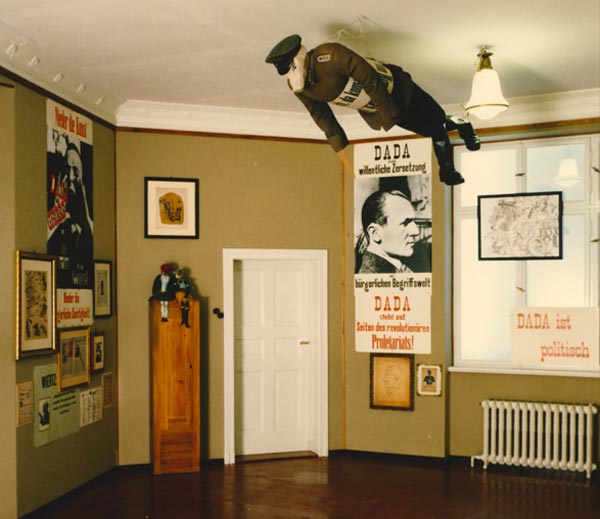 It is normal for art critics to provide labels for art movements such as cubism and expressionism. The Dada artists were the ones who named their movement.

There are various origin stories for the term Dada. Was it meant to play off a child’s first syllables calling his father – da da? Unlikely. Some say it was the result of artists Tristan Tzara and Marcel Janco’s usage of the Romanian word for yes, which is often repeated several times for effect, thus da da, meaning yes, yes. A Frenchman might say, “C’est mon dada” meaning “It’s my hobby.” It’s even claim that Zurich Dada artists looking for a name for their movement randomly stuck a knife into a French-German dictionary.

CURATOR’S NOTE: This is an accurate reproduction of Wieland Herzfelde’s Introduction. I’ve broken some of the text into paragraphs. I’ve also inserted the words “Berlin Dada Art” into some parts of the text to increase clarity.

“In the past, the express purpose of painting was to offer people depictions of things, landscapes, animals, buildings, etc., which they could not watch with their own eyes. Today, this task has been assumed by photography and film, and they solve it with an incomparably greater perfection than painters throughout the ages ever have achieved.

Painting, however, did not die with the loss of this objective but sought new objectives. All subsequent artistic endeavors, no matter how diverse, can be classified as having the common tendency to seek emancipation from reality.

[Berlin Dada Art] Dadaism is the reaction to all attempts to deny the factual, which was the driving force of the Impressionists, Expressionists, Cubists, and of the Futurists as well(unwilling as they were to capitulate to the film). But this does not at all mean that once again the [Berlin Dada Art] Dadaist undertakes to compete with the camera or even breathe a soul into it by leaving everything (as the Impressionists do) to that worst lens of all, the human eye, or (like the Expressionists) by turning the camera round and forever depicting merely his interior life.

The [Berlin Dada Art] Dadaists are saying: While once vast amounts of time, love, and effort went into the painting of a body, a flower, a hat, a hard shadow, etc.‚ we now only need to take scissors and cut out what we need from among the paintings and photographic depictions of all these things. If the things in question are on a small scale, we do not even need illustrations; we take the objects themselves instead‚ e.g., pocketknives‚ ash trays, books‚ etc.‚ things which, to be sure, can be found, beautifully painted, in the museums of traditional art. But that’s just it, merely painted.

And now for the famous question: Yes, but what about the content, the spiritual?

In the course of the centuries, the unequal distribution of opportunities for life and personal development has produced‚ as in all other spheres, outrageous conditions also in the art world

On the one hand, a clique of so-called artists and talent who, partly through decades of training, partly through protectionism and tenacity, partly also through inherited special gifts, have monopolized all matters of art evaluation. On the other hand, the many people whose naive, unpretentious urge to express their own ideas and the events in their lives, to give them constructive shape, unless he is willing to forego all training or broadening of his innate aptitude, has to submit to the authoritarian structured system of art education and the public judgment of art. Whereas the Dadaists are saying that to produce pictures is no big deal.

If it […producing art…] does happen, at least there should be no despotic standpoint laid down, and the broad masses should not have their pleasure in creative activity spoiled by the arrogance of experts from some supercilious guild. That is why the content of the Dadaist pictures and creations can be extremely varied and so can their means of expression.

Any creation is [Berlin Dada Art] Dadaist that is produced uninfluenced by and heedless of, public authorities and values‚ provided the depiction is anti-illusionist and motivated entirely by the urge to keep on eroding the present world which is obviously in a state of disintegration, of metamorphosis. The past is only important and relevant in so far as its cult must be fought.

The Dadaists agree in this respect; they say that what antiquity, the classical age, and all the “great minds” have created must not be judged in respect of the period in which it was created (except through a scientific, historical approach)‚ but rather as if it were produced today; and nobody will doubt that today not a single person, even if he were, to use an art term, a genius, could produce works the conditions of which were prevalent hundreds and thousands of years ago.

The [Berlin Dada Art] Dadaists take credit for being the vanguard of dilettantism, for the art dilettante is nothing but the victim of a prejudiced, arrogant, and aristocratic conception of life. The Dadaists acknowledge as their sole program the obligation to make what is happening now in time and in place the content of their pictures, which is the reason why they Consider as their sources the illustrated journals and the editorials in the press, rather than The Arabian Nights or Bilder aus Hinterindien [Views of Southeast Asia].”