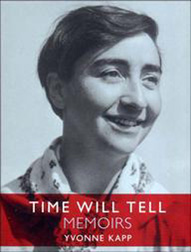 At the age of 93, Yvonne Kapp said, “If you live a long life, you have a lot of stories to tell.”

Born to a Jewish family in 1903, Yvonne’s first rebellion was to study journalism. In August 1922, she entered into a tumultuous marriage with the artist Edmond Kapp.

She offered space in her London home to political refugees. In 1938, she served as Assistant to the Director for the British Committee for Refugees from Czechoslovakia.

Following his escape from Czechoslovakia as the Nazi Army approached, John Heartfield arrived in London.

She described the refugee as “a small, nervous gentleman, who turned down an offer of food, and asked to be allowed to lie down immediately.”

The next morning, Ms. Knap tried to repeatedly to awaken Heartfield for breakfast with no success. She became so worried that she called friends to come to her home to remove the door from its hinges.

They found John Heartfield “sleeping like a baby […] it must have been the first time he had slept in safety in many years.”