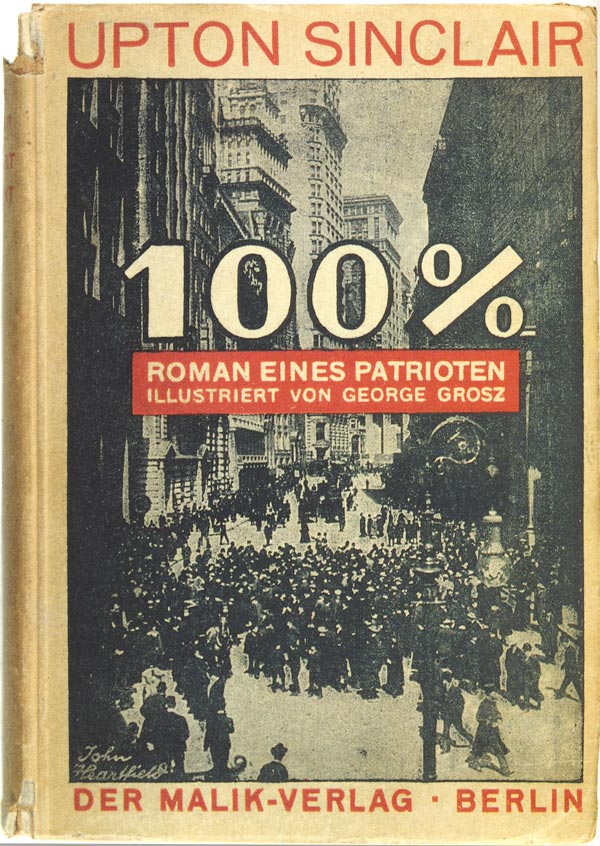 The Story Of A Patriot by Upton Sinclair

100%. Roman eines Patrioten [100%. The Story of a Patriot] is Upton Sinclair’s novel depicting the struggle between America labor interests and big business in the World War I Era. While Sinclair is, as usual, sympathetic to the working class, he uses an ingenious plot device. He relates the story of the brutal tactics employed in this conflict from the perspective of big business.

Sinclair’s novel was published by Malik-Verlag publishing. Many of the novels published by Malik-Verlag were rooted in political commentary on Weimar Republic society and politics. John Heartfield was just beginning to develop the groundbreaking typography and revolutionary graphic designs that would make his one of the most sought after advertising graphic designers in Germany.

Some consider Upton Sinclair the literary liberal brother of Ayn Rand. Both authors considered their novels as a means to an end.

The back of John Heartfield’s cover features a meeting of the Ku Klux Klan. It’s Heartfield’s clear statement regarding the bigotry and hatred that emerges from conflict.