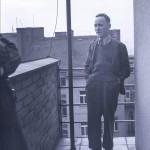 In the midst of being hunted by the Nazis, Heartfield finds time to enjoying a pleasant conversation on a terrace. 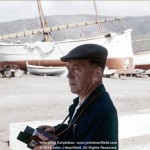 John Heartfield in Sestri Levante, Italy, in 1960, holding a movie camera. That camera took some of the video on the exhibition. It is now in the curator’s private collection. 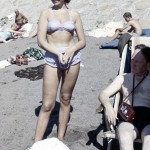 John Heartfield enjoying the view on a beach in Sestri Levante, Italy, in 1956. The camera around his neck seems as necessary as his bathing suit. 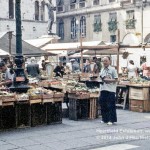 John Heartfield in an outdoor market in Chiavari, Italy, 1960, with an ever present camera around his neck. 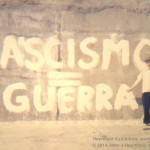 John Heartfield, Liguria, Italy, November 1960. Note the camera bag slung over Johnny’s shoulder. Scholars have wondered if Jonny took photographs. In almost every slide I have of Jonny in Italy, he has a camera slung around his neck or is taking a photo. 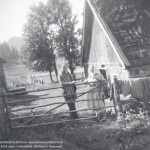 The annoyed expression on my grandfather’s face was probably due to being interrupted in conversation in order to pose for a photo.

In 1930, the antifascist activist artist John Heartfield was a mere five-foot-two inches (158.496 cm) tall. He weighed approximately 100 pounds (45.3592 kilograms). He had piercing blue eyes and a fiery temper. This was the frail body that John Heartfield placed squarely in the cross hairs of the Nazi assassination squads. Yet, he survived because he was treasured by those who knew he was one of their most potent weapons against The Nazis. Here are rare photos of Heartfield’s senior years from The John J Heartfield Collection. The artist who made his art a weapon to express his furious hatred of Adolf Hitler and his allies was known to be kind and gentle with those he loved, befriended, and admired. His family called him “Jonny.” The family of his Italian daughter-in-law affectionately called him “Professore.” His grandson calls him his hero and his inspiration.John J Heartfield presents never-before-published photos of Heartfield as a fighter, friend, and family man.