“Since I, as you well know, I am an old pacifist,

you can imagine how important maintenance of peace is to me.”

Famous Pacifist Artist John Heartfield Used Art As A Weapon In His Fight For Peace, 1952

“My dear [Wilhelm] Sternfeld,
[…] It’s possible you may have learned that I almost died last year. I collapsed in the train from Leipzig to Berlin. I had a heart attack. I’m feeling better now […]
I’ve found out from [Johannes R.] Becher how very well you’ve acted about the PEN Club matter [the setting up in London of the PEN Club of German authors abroad]. Of course, I’m very glad to hear this. It is clear such good composure is important. Is there an attempt to split German literature as well, perhaps even the German language?! The longing of most Germans, even in West Germany, for unity is so great, that everyone who works against it, in whatever field it may be, is considered its foe and a foe of every advancement that is hostile to progressive literature. […]

Now, back to me. Be assured that where we are neither thin or fat capitalists are eaten for breakfast or for supper. That happens often enough where you are and elsewhere. […] We’ve got other cares and problems. Can peace be maintained, can splendid things be accomplished here? And I believe we can maintain peace. Our main problem is to do everything aimed in that direction. Since I, as you well know, I am an old pacifist, you can imagine how important maintenance of peace is to me. That’s everybody’s main objective here. I suppose that’s so among your old friends. Your stand for the unity of the Pen Club is a point in favor for it [and] for you. On this note of peace, I greet you [and] your wife, the old friends [and] acquaintances of London with all the best. […]

In 1952, John Heartfield marries Gertrud Fietz. However, the marriage is not documented with an “East German marriage certificate” until 1968 after before Heartfield’s death. This is days after Heartfield signed a three-page will ensuring the entire collection of Heartfield’s surviving art will be stored  in the Heartfield Archiv, East German Akademie der Künste. Heartfield’s two children, Tom and Eva, or his beloved brother, Wieland, are not mentioned in the will. Gertrud writes to Tom that the situation in East Germany made this impossible. It is an event that will have a terrible effect upon John Heartfield’s recognition and renown as an artist.

John Heartfield works on Niolai Pogodin’s play Glockenspiel des Kreml (The Chimes of the Kremlin), Berlin Ensemble, with artists Wolfgang Langhoff and Betty Loewen. The Stasi, the East German secret police, who interrogated Heartfield with the goal of providing evidence for a treason trial that also threaten Langhoff and Loewen.

Heartfield suffers his second heart attack in Leipzig. He must remain in the hospital until May 1953. He still lacks any of the health benefits of membership in East German Communist Party or Membership in the Akademie der Künste. He does narrowly avoided a treason trial as a suspected spy for the West. However, he remains under suspicion.

NOTE: When lawyers for the family requested John Heartfield’s Stasi file from the German Government they were told there was nothing in the file. That was untrue. David King published a translation of Heartfield’s Stasi interrogation by a member of the Heartfield Archiv. 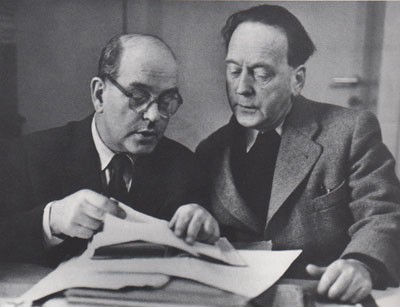 (L-R) Brothers Wieland Herzfelde and John Heartfield in East Germany, 1952. Wieland was instrumental in the distribution of John's work. When he brought Heartfield back to East German (GDR), he must not have known the fate that awaited his brother.