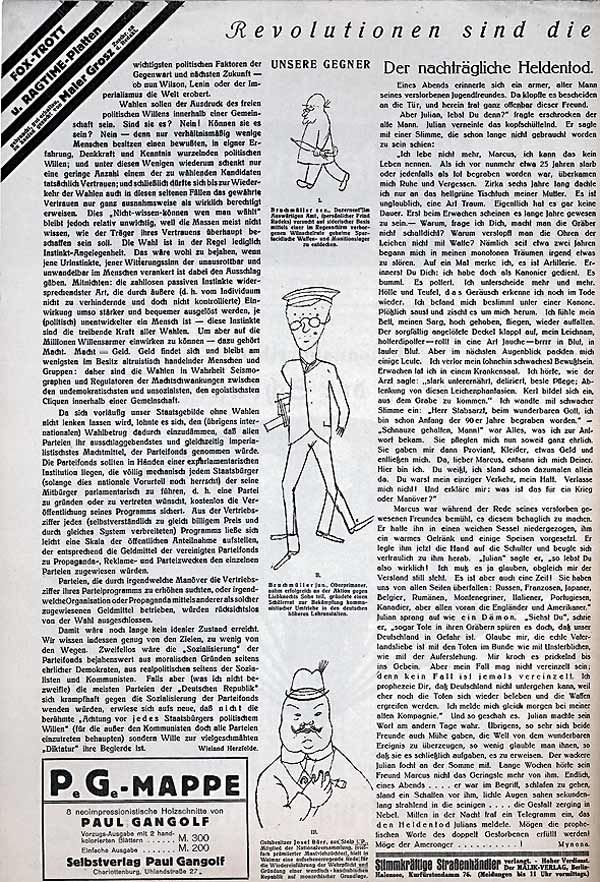 The groundbreaking satirical tabloid Jedermann sein eigener Fussball (Everyone His Own Football) was an illustrated left-wing “German Dada Grosz Heartfield” periodical published in 1919 by Malik Verlag, the publishing house jointly run by John Heartfield and Wieland Herzfelde. It is one of the most remarkable and radical of the Berlin Dada magazines. So, naturally, it was immediately outlawed.

Renowned German Dadaists such as Georg Grosz, John Heartfield, Richard Huelsenbeck, Walter Mehring, and Erwin Piscator contributed their biting wit to this bold Dada periodical. In true German Dada fashion, John Heartfield’s baby son, Tom (only nine months old), was listed as a featured staff member. Perhaps the intention was to proclaim that Dada was for the masses and anyone of any age could proclaim themselves a Dadaist.

Two ingenious Dada photo montages by John Heartfield graced the innovative front cover of the first issue of Jedermann sein eigener Fussball (Everyone His Own Football). The eye-catching typeface was meant to draw the potential subscribers into absorbing the radical political ideas the Dadaists launched at the staid impotent political powers of the Weimar Republic.

Everyone His Own Football) and Heartfield’s highly provocative Preisausschreiben! Wer ist der Schönste?? (Contest! Who is the Prettiest??) are believed to be the first known political photo montages.

Nine male political representatives are displayed as decorations on a fan, instantly challenging their purpose and function. The inclusion of Gustav Noske is especially noteworthy. Noske had recently gained notoriety for using army and paramilitary forces to brutally quell the Spartacist Uprising. His actions resulted in the murder of Rosa Luxemburg and Karl Liebknecht.

The revolutionary “Dada Grosz Heartfield” publication Jedermann sein eigener Fussball (Everyone His Own Football) shows a caption, German male beauty (Deutsche Mannesschönheit). This sarcastic caption could suggests support for the newly gained women’s suffrage in Germany. Only thirty seven of the 300 women who campaigned for election succeeded.”